Being milk-free is a huge pain in the butt.  As with wheat and corn, it is in absolutely EVERYTHING!  Luckily I seem to be okay with it in small amounts cooked into food, but as I don't know for certain where Squish's threshold is, it's better for me to just avoid it.  I've been drinking soy milk since the early days of my pregnancy (regularly dairy milk gave me horrible acid stomach...I should have known right then and there!)  When I started researching healthy foods in preparation for my 100 days of real food challenge, I discovered some really disturbing articles concerning the dangers of too much soy and decided to switch  to something else.  Because rashes from consuming coconut are only so much fun for me, I decided to go the way of almond milk.  While it has fewer grams of protein per 1 cup serving, it does have more nutrients than rice milk, and the taste is much more palatable to me than hemp or oat milk.  The stores in my area do carry it, but at an exorbitant price, and it's not always easy to get out to the store when you have kids.

Plus, did you know--it's actually VERY simple to make your own almond milk?

Soak the almonds overnight in just enough water to cover (or at least 8 hours if you don't want to wait that long.)  Discard the water and rinse. 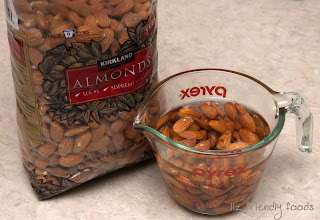 Fill a blender with water (3 - 4 cups should do) and then add the almonds.  Blend on high until smooth. 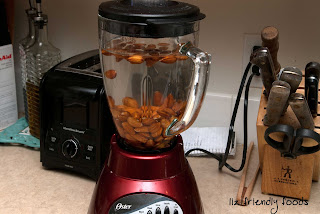 Get a medium bowl (or an 8 cup Pyrex measuring cup!) and put a cotton towel in it.  Pour the almond mixture into the bowl, then carefully strain the almond meal out of it.  You can keep the almond meal for use in baking (spread it out on a baking sheet and bake at 350 for 15 minutes or until golden), find a friend who loves it, or discard it.  I don't have pictures of that part because I am silly and assumed that cheesecloth would work just fine.  It didn't.  Don't use cheesecloth or you will be sad like me and wind up with no almond meal after! 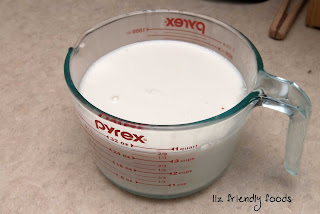 Store the almond milk in a quart-size mason jar in your fridge and enjoy!  You can flavor it (vanilla, chocolate, honey, whatever!) or leave it plain.  It does separate between uses, so make sure to shake it well before pouring it on cereal, using it in baking, or drinking it plain.  I started out with just straight almond milk over Rice Chex (amazing!!!!), then in a cup with a little bit of honey (also amazing!!!!)  I gave some to my son, too...I think he approves. 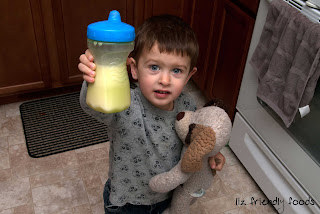 1) Cover almonds with water and soak overnight, or at least 8 hours.  Drain.
2) Put 4 cups of water in the blender; add almonds and sweetener (I wouldn't add more than a tablespoon; you really don't need much.)  Blend on high for a few minutes.
3) Put a thin cotton tea towel over a bowl and strain out the almond meal.  Set meal aside.
4) Pour almond milk into two 1/2-qt jars and seal.  Milk separates between use, so shake well.
5) Roast almond meal on a baking sheet at 350 for approximately 15 minutes.  Let cool, store in an airtight container in the fridge for up to a week, or in the freezer for up to 3 months.
Posted by Unknown at 12/18/2012 09:24:00 PM